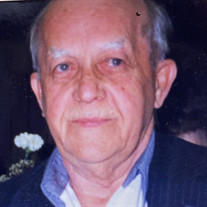 Nelson R. Erbisch, age 98 of Harbor Beach, passed away Monday, March 29, 2021 at McLaren Port Huron Hospital. He was born on November 14, 1922 in Sebewaing, to the late Adolf and Emma (Nitzke) Erbisch. Nelson served in the US Army during World... View Obituary & Service Information

The family of Nelson R. Erbisch created this Life Tributes page to make it easy to share your memories.

Send flowers to the Erbisch family.