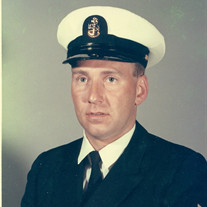 ORIN N. GAHLAU, age 78 of Port Hope, passed away Tuesday, May 06, 2014 at Courtney Manor Nursing Center of Bad Axe. He was born on January 29, 1936 in Detroit to the late Norman & Dorothy (Kraft) Gahlau. Orin and Arnette May were united in marriage on November 3, 1963 in Grosse Ile. He then went to school at Maple Grove Elementary and graduated from Utica High School Class of 1954. Orin retired from the US Navy in 1976 after 22 years of service, retiring as Chief Aerographer. Once they moved to Port Hope, he worked at Wilson Hardware from 1976 until 1982, and Heins Hardware from 1982 until 1988. Orin was a member of St. John Lutheran Church of Port Hope. Orin served on the St. John Lutheran School Board of Education from 1979 til 1981, and was a St. John Finance Committee Member, was a member of TRIAD, was a corporate observer for the National Weather Service for 16.5 years, and was a lifetime member of the Fleet Reserve Association. His hobbies included gardening, golfing and reading. Orin was highlighted in the book “Beward the Hurricane” written by Terry Tucker. Orin is survived by his wife Arnette Gahlau of Port Hope, Sons: Rayne Gahlau and his wife Jodi of Macomb, and Shane Gahlau and his wife Kimberly of Wyoming, Michigan. 2 grandchildren: Joshua and Kayla, sister Gail (John) Lukity of Sterling Heights, sister-in-law Mary Lou Gautz of Monroe, nephews: Terry (Kathryn) Gautz, Tom (Alesia) Gautz, Tim Gautz, Randy Rieck, Ryan Rieck, niece Rhonda (Jay) Woody, 7 great nephews, great great nephew Joshua Gautz and several cousins. Funeral Services for Orin will be Friday, May 9, 2014 at 2pm at the St. John Lutheran Church of Port Hope, with Rev. Greg Eilers officiating. Burial will be in the Great Lakes National Cemetery in Holly. Visitation for Orin will be Thursday, from 1-8pm at the Ramsey Funeral Home of Harbor Beach. Visitation on Friday will be at the church beginning at 1pm until time of services at 2pm. A scripture service will take place Thursday at 7 pm at the funeral home. Memories can be shared at www.RamseyFH.com

ORIN N. GAHLAU, age 78 of Port Hope, passed away Tuesday, May 06, 2014 at Courtney Manor Nursing Center of Bad Axe. He was born on January 29, 1936 in Detroit to the late Norman & Dorothy (Kraft) Gahlau. Orin and Arnette May were united in... View Obituary & Service Information

The family of Orin N. Gahlau created this Life Tributes page to make it easy to share your memories.

Send flowers to the Gahlau family.