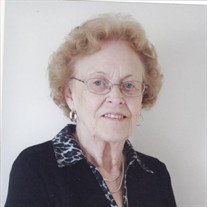 Patricia Ellen Veal, 85, died November 6, 2015, after a short illness. She was born February 28, 1930, daughter of Leo and Ellen Anna (Stapleton) Shubitowski. She married Thomas John Veal on August 20, 1949, at Our Lady of Lake Huron Catholic Church in Harbor Beach. He preceded her in death on November 22, 2010. Mrs. Veal was a graduate of Our Lady of Lake Huron High School. She worked at the Harbor Beach Creamery for several years. Later she worked at Veal & Kamp Plumbing & Heating from 1960 to 1984. She enjoyed her travels to Arizona and Florida with her husband. Taking care of her home, cooking and baking various desserts, eating anything chocolate and playing Yahtzee were among her favorite past times. Her greatest joy was spending time with great-grandchildren. Surviving are a daughter, Deborah Oglenski and her husband P. Stephen, of Harbor Beach; a son, William T. Veal, and his wife, Julie, of Kimball Township; five grandchildren, Sarah Roberts, and her husband Nate, of Oak Park, IL; Erin Modrzynski , and her husband, Kristopher, of Clarkston; Claire Romzek, and her husband, Gavin, of Las Vegas, NV; William Jarred Veal, and his wife, Dee, of Aberdeen, MD; and Garrett Veal of Port Huron; nine great-grandchildren, Samuel, Grace and William Modrzynski; Caleb and Graham Roberts; Owen, Maxwell and Lyla Romzek; and William ”Liam” E. Veal. She is also survived by a brother, Leo Shubitowski, and his wife, Johanna, of Walpole, MA, and many nieces and nephews. Mrs. Veal was preceded in death by four sisters: Agatha Conboy; Esther Ashley; Doris Peterson and Clara Turner. A Mass of Christian burial will be conducted at Holy Name of Mary Church, Our Lady of Lake Huron site, Monday, November 9, at 11:30 am, with Father William Spencer, pastor, officiating. Burial will follow in Our Lady of Lake Huron Cemetery. Visitation will be Sunday, November 8, from 2pm to 8pm at the Ramsey Funeral Home of Harbor Beach. Visitation on Monday will be at the church beginning at 10 am until the time of service at 11:30 am. A parish Scripture service is November 8, 2015 at 7:30 p.m. Memorials may be made to Our Lady of Lake Huron School, Heartland Hospice or the American Cancer Society. Memories can be shared at www.RamseyFH.com

The family of Patricia Veal created this Life Tributes page to make it easy to share your memories.

Send flowers to the Veal family.