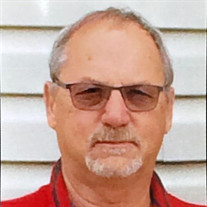 Randy J. Will, age 68 of Harbor Beach, passed away Friday, May 14, 2021 at his home under hospice care, with his family by his side. He was born on September 25, 1952 in Harbor Beach, to the late Keith and Florence (Badgley) Will. He and Deb Cooper were united in marriage on September 23, 1972 in Harbor Beach. Randy worked at Sensient in Harbor Beach for many years. Randy was an avid outdoorsman. He loved fishing & hunting and spent much time preparing his food plots & waiting for the "Big Buck" which finally got a few years ago. He spent many earlier years playing softball and was known as one of the fastest players to run the bases earning him the new name "Randy Wheels". After retirement he joined a golf league until he was no longer physically able to continue playing. Randy was alreadys ready for a game of euchre, washers or cornhole. And of course he loved spending time with his family, especially his grandchildren. He is survived by his wife Deb Will of Harbor Beach, children: Tracy Eberling and friend Tom VanDeVelde of Columbus, Michigan, Randy (Angela) Will, Jr. of Boerne, TX grandchildren: Zachary, Nathan, Isabella, and siblings: Diane Zinger of Harbor Beach, Connie Susalla of Harbor Beach, Deb (Dennis) Schave of Harbor Beach, Barb (Dale) Schultz of Harbor Beach, Lori (Rick) Murawske of Harbor Beach, brother-in-law Gary (Mary) Cooper of Harbor Beach, and many nieces and nephews. Randy was preceded in death by his parents, Keith Will & Florence will, brother Ken Will, brothers-in-law: John Zinger and Ray Susalla, his nephew Sean Murawske, and mother and father-in-law Rose & Gordon Cooper. Funeral Services for Randy will be Tuesday, May 18, 2021 at 1 pm at the Ramsey Funeral Home of Harbor Beach. Burial will follow in Rock Falls Cemetery. Visitation for Randy will be on Monday from 2-8 pm at the funeral home, and on Tuesday from 12 noon until time of services at 1 pm. Memories can be shared at www.RamseyFH.com

Randy J. Will, age 68 of Harbor Beach, passed away Friday, May 14, 2021 at his home under hospice care, with his family by his side. He was born on September 25, 1952 in Harbor Beach, to the late Keith and Florence (Badgley) Will. He and Deb... View Obituary & Service Information

The family of Randy J. Will created this Life Tributes page to make it easy to share your memories.

Send flowers to the Will family.