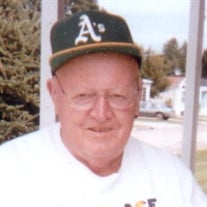 RAYMOND E. EMMING, age 81 of Harbor Beach, passed away Friday, May 16, 2014 at Huron Medical Center of Bad Axe. He was born on August 11, 1932 in Sherman Township to the late Bernard and Alma (Tenbusch) Emming. Ray farmed with his parents and brothers until entering the US Army in January of 1954 (CPL Raymond B. Emming). Ray served in the US Army from 1954 to 1956 serving in the Korean Conflict. He and Patricia Armstead were united in marriage on April 28, 1956 in Harbor Beach. Ray and Pat then moved to their farm and farmed for ten years. They then purchased the Farmers Tavern in Ruth, which they owned and operated for 26 years. During that time Ray drove the Ruth School Bus, managed the Bad Axe Grain Elevator until it closed, then he went back to work at the Ruth Farmers Elevator. Ray was a member of Our Lady of Lake Huron Catholic Church, and the American Legion Post of Harbor Beach. He is survived by his wife Pat of Harbor Beach, son Michael Emming and his wife Julie of San Diego, brothers: Robert and Arlene Emming of Harbor Beach, of Ruth, Leo and Donna Emming of Ruth, Leonard and Linda Emming of Harbor Beach, Marvin and Regina Emming of Ruth, sisters: Shirley and Leo Holdwick of Ruth, Mary Lou and Damon Wolczak of Ohio, Judy Emming of Tenneessee, Marlene and Gary Geiger of Harbor Beach and Susan and Terry Aren of Romulus, sister-in-law Rose Ann emming of Ruth, brother-in-law Lawrence Kranz of Harbor Beach, and several nieces and nephews. Ray was preceded in death by a brothers Melvin Emming and Joe Emming and sister Delores Kranz. Funeral Mass for Raymond will be Tuesday, May 20, 2014 at 2pm at Our Lady of Lake Huron Catholic Church of the Holy Name of Mary Parish, with Fr. William Spencer officiating. Military Honors will be given by the American Legion Post 197 of Harbor Beach. Internment will take place at Sacred Heart Cemetery. Visitation for Ray will be Monday, from 2-8pm at the Ramsey Funeral Home of Harbor Beach. Visitation on Tuesday will be at the church beginning at 1pm until time of services at 2pm. A Parish Vigil service will take place Monday at 7pm at the funeral home.

RAYMOND E. EMMING, age 81 of Harbor Beach, passed away Friday, May 16, 2014 at Huron Medical Center of Bad Axe. He was born on August 11, 1932 in Sherman Township to the late Bernard and Alma (Tenbusch) Emming. Ray farmed with his parents and... View Obituary & Service Information

The family of Raymond B. Emming created this Life Tributes page to make it easy to share your memories.

Send flowers to the Emming family.