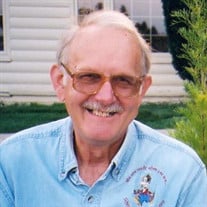 RICHARD SCHMALZ, age 84, a lifelong resident of Harbor Beach, passed away Saturday, April 13, 2019 at his home, surrounded by his family when he went to be with our Heavenly Father. He was born on June 16, 1934 in Harbor Beach, to the late E. Allen & Mary (Ganley) Schmalz. On October 23, 1954 he married his Port Huron sweetheart, Joyce Ann Christenson, only to be sent off to fight in the Korean War shortly there after. The newlyweds were reunited in August of 1956. Richard followed into the family business, Schmalz Plumbing & Heating, which began in 1910, as a master plumber. Rich was known around his community as a compassionate hardworking business owner that was always willing to lend a hand to someone in need. He was active in the JayCees, a life member of the Harbor Beach Conservation Club, and a member of the American Legion Post 197. He enjoyed fishing and hunting, family bonfires, as well as keeping track of his freighters passing by his home. Joyce and Rich loved travelling in their motor home to northern Michigan and Florida to see special relatives and friends, until her death on April 14, 2014. Rich is survived by his children: Beth Welker of Harbor Beach, Paul Schmalz of Valley View, OH, Michael (Sharon) Schmalz of Harbor Beach, Daniel Schmalz of Aiken, South Carolina, grandchildren: Jennifer & Andrew Schmalz, Zachary & Gabriel Martinez, Jade and Leah Schmalz, Brothers: Thomas (Judy) Schmalz of Lake Orion, Fred Schmalz and special friend Kim of Detroit, Brother-in-law Mark (Ann) Christenson of Fort Gratiot, and was endeared by many loving nieces and nephews. He was preceded in death by sisters: Lexie (Donald) Wade, Carol (John) Wojnar, son-in-law Alfred Welker, and daughter-in-law Theresa Schmalz. Cremation has taken place at Sunset Valley Crematory of Bay city. A memorial service will take place Saturday, August 17, 2019 at 6 pm at the Harbor Beach United Methodist Church. Friends may gather at the church beginning at 5 pm until time of services at 6 pm. Military Honors will be given by the American Legion Post 197 of Harbor Beach. Arrangements are being handled by the Ramsey Funeral Home of Harbor Beach. Memorials may be given to the Family Discretionary Fund. Memories can be shared at www.RamseyFH.com

RICHARD SCHMALZ, age 84, a lifelong resident of Harbor Beach, passed away Saturday, April 13, 2019 at his home, surrounded by his family when he went to be with our Heavenly Father. He was born on June 16, 1934 in Harbor Beach, to the late... View Obituary & Service Information

The family of Richard Schmalz created this Life Tributes page to make it easy to share your memories.

Send flowers to the Schmalz family.