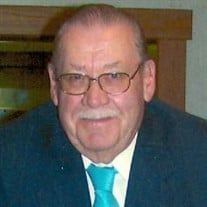 RICHARD WITHERSPOON, age 79, of Port Hope, passed away Saturday, July 30, 2016 at Huron Medical Center of Bad Axe. He was born on May 24, 1937 in Port Hope to the late Elmer and Olga (Detgen) Witherspoon. He and Harriett Richardson were united in marriage on June 2, 1956 in Port Hope. Richard was a member of St. John Lutheran Church of Port Hope. He was a retired employee of Thumb Farm Service, after working there for 44 years; he was a lifelong volunteer fire fighter for the Port Hope Fire Department. He enjoyed restoring engines, old tractors and cars, was an avid Detroit Tigers fan, was a hunter and loved fishing up north at their cabin with his family in St. Helen. He was a former member of the Port Hope Village Council, a member of the Grindstone Port Hope Sportsmen Club, and spent 25 winters with his wife in Florida. He is survived by his wife Harriet Witherspoon of Port Hope, sons: Calvin Witherspoon of Roscommon, Duane Witherspoon and his wife Cathy of Rochester Hills, Chris Witherspoon and his wife Jodi of Clarkston, and Gregg Witherspoon and his wife Gretchen of Saginaw, 7 grandchildren, 1 great granddaughter, brother: Robert Witherspoon of Port Hope, and sisters: Jean Weiss of Saginaw, Karen Whitehead and her husband Richard of Atlanta, GA, and Diane Reinke and her husband Dale of Sandusky, and sister in law Gloria Witherspoon of Harbor Beach. Richard was preceded in death by a sister Arlene Brown, and brothers: Arnold, Norm and Ken Witherspoon. Funeral Services for Richard will be Friday, August 5, 2016 at 11 am at St. John Lutheran Church of Port Hope, with Rev. David Dodge officiating. Burial will follow at New River Cemetery. Visitation for Richard will be Thursday, August 4, 2016 from 2-8pm at the Ramsey Funeral Home of Harbor Beach. Visitation on Friday will be at the church from 10 am until time of services at 11 am. Memories can be shared at www.RamseyFH.com

RICHARD WITHERSPOON, age 79, of Port Hope, passed away Saturday, July 30, 2016 at Huron Medical Center of Bad Axe. He was born on May 24, 1937 in Port Hope to the late Elmer and Olga (Detgen) Witherspoon. He and Harriett Richardson were united... View Obituary & Service Information

The family of Richard Witherspoon created this Life Tributes page to make it easy to share your memories.

Send flowers to the Witherspoon family.