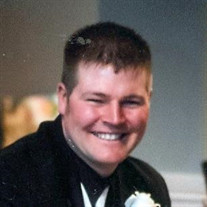 ROBERT P. DALLAS, age 31 of Harbor Beach, passed away Sunday, August 02, 2015 under hospice care with his family at his side. He was born on September 22, 1983 in Bad Axe to Robert and Veronica (Gusa) Dallas. Robert and Chelsey Pionk were united in marriage on April 27, 2013 at Smiths Corners. Robert worked on the family farm all of his life. He enjoyed working on the farm, hunting, fishing and taking his son Ethan for Four-wheeler rides. Robert is survived by his wife Chelsey Dallas of Harbor Beach, son Ethan Dallas of Harbor Beach, mother and father Robert and Veronica Dallas of Harbor Beach, and sisters: Julie Dallas of Harbor Beach, Lori Milosevic and her husband Ben of Washington Township, Sarah Dallas and fiancé Greg Sonnenberg of Harbor Beach, his nephew God Son Zachery Milosevic and nephew Travis Milosevic, niece Haley, his mother-in-law Darlene Pionk and her special friend Jeff Lipskey of Ubly, and sisters-in-law: Nicole Coddington and her husband Joe along with their children: Arabell and Phoebe of Ubly, Samantha Pionk and Alexis Pionk of Ubly, and many uncles, aunts and cousins. He was preceded n death by his grandparents: Richard and Rita Dallas, Albert and Florence Gusa, father-in-law Jerry Pionk and Great Aunt and Uncle Fay and Bernard Braun. Funeral Mass for Robert will be Thursday, August 6, 2015 at 11 am at Sts. Peter and Paul Catholic Church of the Holy Apostles Parish of Ruth. Burial will follow in the church cemetery. Visitation for Robert will be Tuesday, August 4, 2015 from 7-9pm at the Ramsey Funeral Home of Harbor Beach, Wednesday, August 5, 2015 from 1-9pm at the funeral home, and on Thursday at the church beginning at 10 am until time of services at 11 am. A rosary service will take place on Wednesday at 7pm at the funeral home, A Parish Vigil Service will follow at 730 pm. Memories can be shared at www.RamseyFH.com

ROBERT P. DALLAS, age 31 of Harbor Beach, passed away Sunday, August 02, 2015 under hospice care with his family at his side. He was born on September 22, 1983 in Bad Axe to Robert and Veronica (Gusa) Dallas. Robert and Chelsey Pionk were united... View Obituary & Service Information

The family of Robert P. Dallas created this Life Tributes page to make it easy to share your memories.

Send flowers to the Dallas family.