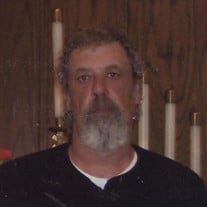 ROBERT DAVID JOHNSON, age 64 of Port Hope, passed away Wednesday, August 10, 2016 at William Beaumont Hospital Royal Oak, after a brief battle with cancer. Robert was born on January 4, 1952 in Detroit. He was adopted and raised by his parents; the late Donald and Helen Johnson. He and Betty Halifax were united in marriage on June 20, 1992. He was a loving husband and devoted father and grandfather. Robert worked at Paperoll for a number of years, he then worked for US Manufacturing for 19 years, and Hill Top Nursery until he retired. He enjoyed landscaping, was a big fan of the Detroit Tigers, Lions and Red Wings. He enjoyed coyote hunting in the winters, and enjoyed having coffee with the gang. His favorite was being able to spend time with his family, especially the grandchildren. Robert was a member of St. John Lutheran Church in Port Hope. He is survived by his wife Betty Johnson of Port Hope, and his children: Chad Johnson and his wife Kelli of Ubly, Cari Fritz and her husband Jeff of Bad Axe, Ryan Johnson and his wife Kim of Bad Axe, and Cory Johnson of Port Hope. 7 grandchildren: Laken, Chandler Rosenthal, Logan, Madelyn & Jaelyn Johnson, Keira Johnson and Blaklei Fritz, 2 step grandchildren: Camryn Fritz and Steven Depcinski, his mother and father-in-law: Mary and Jack Halifax, 3 sisters-in-law: Beverly (Keith) Vogel of Minden City, Tammy Kellog of Minden City, Janel (David) Gosdzinski of Ubly, 2 brothers-in-law: Jerry Halifax of Minden City and Craig (Paulette) Halifax of Ubly, and several nieces and nephews. Funeral Services for Robert will be Saturday, August 13, 2016 at 11 am at the Ramsey Funeral Home of Harbor Beach, with Rev. David Dodge officiating. Cremation will follow at Sunset Valley Crematory of Bay City. Visitation for Robert will be on Friday, August 12, from 2-8pm at the funeral home, and on Saturday beginning at 10 am until time of services at 11 am. Memorials may be given to the Family Discretionary Fund. Memories can be shared at www.RamseyFH.com

ROBERT DAVID JOHNSON, age 64 of Port Hope, passed away Wednesday, August 10, 2016 at William Beaumont Hospital Royal Oak, after a brief battle with cancer. Robert was born on January 4, 1952 in Detroit. He was adopted and raised by his parents;... View Obituary & Service Information

The family of Robert D. Johnson created this Life Tributes page to make it easy to share your memories.

Send flowers to the Johnson family.