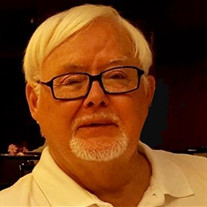 Robert J. Letts, 76, of Harbor Beach went to be with his Lord and Savior on Monday, January 6, 2020. Bob was born on June 22, 1943, in Washington D.C, to the late David and Eathel (McCallum) Letts. He was raised in the Lansing community, and graduated from Sexton High School in 1962 and Northern Michigan University with a degree in education in 1968, after serving his country in the United States Navy. He taught US History and World Geography for 31 years at Millington High School. He was not known for his prowess as a donkey basketball player, but he enjoyed being a part of the school community he worked in. He was an active member the Michigan Education Association, as well as the National Education Association for over thirty years. He proudly served in the United States Navy; Active Duty for two years and Reserves for twenty-eight years. He enjoyed camping with his family when they were young; making cookies for and reading to kindergartners in his retirement. He was a member of and an officer in the Harbor Beach United Methodist Church. In his spare time, Bob enjoyed watching old military movies. He loved to read, and always enjoyed anything chocolate. He will always be remembered for his wit and sense of humor, and his love for his family. Bob is survived by his beloved wife of 38 years, Penny (Callender) Letts; by his children, Laura Letts of Muskegon; Michael Letts of Vassar; Michelle Whistler of Clarkston; Jillynn (Joseph) Keppler of Lake Orion; Jeremy (Nicole) Arntz of Cedar Park, TX; nine grandchildren whom he loved dearly, Lisa, Nick, Rachel, Cody, Ian, Hailey, Matthew, Justin and Jack; sister, Mary (John) Foess of Vassar; brothers-in-law Thomas (Margaret) Callender of Ruth; David (Nancy) Callender of Surry, NH; and Richard Callender of Pigeon, and many nieces and nephews. In addition to his parents, he was preceded in death by his identical twin brother, Thomas G. Letts, who he always affectionately called Elder Brother for being born ten minutes before him. The family will receive visitors at Ramsey Funeral Home, Harbor Beach, Wednesday, January 8, from 2:00 - 8:00 p.m. The funeral service will be at Harbor Beach United Methodist Church, Thursday, January 9 at 11 a.m., with Rev. Sari Brown officiating. Military honors will be given, followed by a luncheon. Visitation on Thursday will be at the church beginning at 10 am until time of services at 11 am. In lieu of flowers, please consider donations to a place near and dear to Bob’s heart, the Harbor Beach Lighthouse Preservation Society. Memories can be shared at www.RamseyFH.com

Robert J. Letts, 76, of Harbor Beach went to be with his Lord and Savior on Monday, January 6, 2020. Bob was born on June 22, 1943, in Washington D.C, to the late David and Eathel (McCallum) Letts. He was raised in the Lansing community, and... View Obituary & Service Information

The family of Robert J. Letts created this Life Tributes page to make it easy to share your memories.

Send flowers to the Letts family.