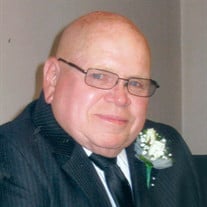 ROBERT SOPCZYNSKI, age 78 of Harbor Beach, passed away Monday, January 20, 2020 at McLaren Port Huron Hospital. Bob was born on August 12, 1941 in Detroit to Marvin Willett and Agnes Koss. He was later raised by Stanley and Agnes Sopczynski. Bob served in the US Coast Guard serving in Vietnam and in the Philippines. He was instrumental in creating the Lowrance System that is the current backup system to GPS. Bob and Ann Canham were united in marriage on November 17, 1962 in Port Huron. She preceded him in death on November 1, 2005. Bob and Carol Baker were united in marriage on July 24, 2015 in Harbor Beach. He retired as a material supervisor from Chrysler in 1997, after 32 years. He was a member of Our Lady of Lake Huron Catholic Church, the Knights of Columbus, the United States Coast Guard Auxiliary, and the American Legion Post 197, where he was past commander. Bob enjoyed fishing, hunting, boating, was a former volunteer with the Boy Scouts. Bob had a unique sense of humor and will be missed. Bob is survived by his wife Carol Sopczynski of Harbor Beach, his mother Agnes Sopczynski of Harbor Beach, daughters: Theresa (Robert) Overcast of St. Clair Shores, Lorriann (Wayne) Moore of New Baltimore, 9 grandchildren, 1 great grandson, and his siblings: Larry (Jan) Sopczynski, Mike (Cindy) Sopczynski, Patrick (Sharon) Sopczynski, James (Debbie) Sopczynski, Sandy (Dave) Saunders, Joseph (Anne) Sopczynski, Stanley Sopczynski, Junior, and Linda Eggert. He was preceded in death by an infant son, Bobbie, grandson: Kenneth Hempel, nephews: Matthew and Andrew, his father Stanley Sopczynski, and brother Rodney Sopczynski. Funeral mass for Bob will be Thursday, January 23, 2020 at 11:30 am at Our Lady of Lake Huron Catholic Church of the Holy Name of Mary Parish. Burial will follow in the OLLH Church Cemetery. Military Honors will be given by the American Legion Post 197 of Harbor Beach. Visitation for Bob will be Wednesday, 2-8 pm at the Ramsey Funeral Home of Harbor Beach. Visitation on Thursday will be at the church beginning at 10 am until time of services at 11:30 am. A Parish Vigil Service will take place at 7pm, Wednesday, at the funeral home. A Knights of Columbus Rosary will be at 6:30 pm, Wednesday at the funeral home. Memorials may be given to OLLH School or to the American Legion. Memories can be shared at www.RamseyFH.com

The family of Robert Sopczynski created this Life Tributes page to make it easy to share your memories.

Send flowers to the Sopczynski family.