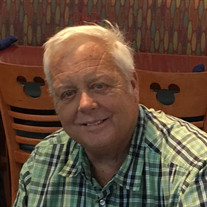 ROGER J. MEYERSIECK, age 71 of Port Austin, passed away Saturday, December 1, 2018, at McLaren Bay Region Hospital. He was born on December 2, 1946 in Mt. Clemens, to the late Edgar Paul and Dorothy Elisabeth (Glidden) Meyersieck. Roger and Glorianne Merrifield were united in marriage on May 18, 1968 in East Detroit. Roger served in the US Navy Seabee during the Vietnam War. Roger worked as an analyst for GM for 33.5 years, retiring in 2000. He was a member of the United Methodist Church. He enjoyed camping, woodworking, travelling, especially to Disney World with his family, freighter watching, and spending time with his family and grandchildren. He especially enjoyed spending time with his dog, Daisy. He is survived by his wife Gloria Meyersieck of Port Austin, and children: Jennifer (Ted) Grabinski of St. Clair Shores, Robert (Jennifer) Meyersieck of New Haven,3 grandchildren: Joshua Grabinski, Madelyn Meyersieck and Jacob Meyersieck, a brother scott (Sue) Meyersieck of Pigeon, and a sister Carol (Jon) Dufenbach of Alaska. Funeral Services for Roger will be Friday, December 7, 2018 at 7 pm at the Ford Funeral Home of Centerline, Michigan. Visitation will be on Friday, from 2-7pm at the Ford Funeral Home. Burial will take place on Saturday, December 8, 2018 at 1 pm at the Port Austin Township Cemetery. Military Honors will be given by the Port Austin Legion Post. Arrangements are being handled by the Ramsey Funeral Home of Harbor Beach. Memorials can be given to the family discretionary fund. Memories can be shared at www.RamseyFH.com

The family of Roger J. Meyersieck created this Life Tributes page to make it easy to share your memories.

Send flowers to the Meyersieck family.