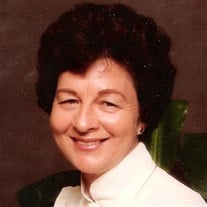 SHIRLEY McMANN SHIRLEY McMANN, age 92 of Caro, formerly of Harbor Beach, passed away Monday, November 10, 2014 at Timberline Lodge of Caro, Michigan. She was born on July 6, 1922 in Otter Lake, MI to the late Casius & Loretta (Jones) Pierson. Shirley and Robert McMann were united in marriage on February 14, 1947 in Royal Oak. He preceded her in death on November 16, 2009. Shirley was a former member of the Verona Hills Golf Club, Harbor Beach Dance Club and the Bridge Club. She enjoyed golfing, playing cards and visiting with friends. Shirley is survived by her children, Atwood Cross and his wife Carol of Traverse City, Richard McMann and his wife Linda of Muskegon and Rhonda Blackburn and her husband Bruce of Caro; 5 grandchildren, Robert Cross, Colleen Evans, Sam Blackburn, Ami Blackburn and Julie Blackburn; 5 great-grandchildren, Cooper Johnson, Adiana Hemsigger, Jackson Holibaugh, Patrick Evans and Kathleen Evans. Also surviving is one brother, Zelwyn Pierson of California and one sister Onilee Hubble of Oscoda. She was preceded in death by her sisters, Lylia, Carmen and Sandy. Cremation has taken place at Sunset Valley Crematory in Bay City. Interment will be in the Kingston Cemetery in Kingston, Michigan. Arrangements are being handled by the Ramsey Funeral Home in Harbor Beach. Memories can be shared at RamseyFH.com

The family of Shirley McMann created this Life Tributes page to make it easy to share your memories.

Send flowers to the McMann family.