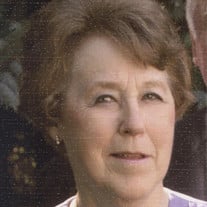 Stella A. Kramer, age 79 of Harbor Beach, passed away Sunday, April 2, 2017 at Lakeview Extended Care and Rehab Center of the Harbor Beach Community Hospital. She was born on June 10, 1937 to the late Joseph and Dorothy (Schultz) Booms. Stella was united in marriage to James R. Kramer on June 14, 1958 in Helena. Stella was a lifelong member of St. Anthony’s Church Helena, and played the organ for 60 years. She took great care to coordinate appropriate music for each weekly service as well as choir members to sing. Stella was a woman who was constantly using her hands in creative and constructive pursuits including, sewing, knitting, making bread and pies, book keeping, berry picking, quilt making, canning foods from the garden, and playing the piano. One of Stella’s great joys was her flower and vegetable gardens which she lovingly tended season after season. She loved to pick berries and count the quarts she gathered everyday. She was also an integral part of helping Jim run the farm. She was in the barn morning and night feeding cattle and carrying bales of hay down the aisle. She frequently took Jim his coffee and sweet rolls in the morning as he milked cows. She loved her role as a farm wife and even in her later years, she could not stay in the house and insisted on going outside to the barn. She was known by her friends and family for her excellent bread and rolls and for fresh coleslaw.Although many others tried her recipes, the end result was never as good as Stella’s. She valued education and took an active role as a 4H Leader, teaching youth important life skills in the areas of food preparation, needlework and sewing arts, and leadership development skills. She served as a 4H Leader for over 30 years in the Helena Community. Stella is survived by her husband James Kramer of Harbor Beach, and children: Clair Kramer and his wife Patty of Harbor Beach, Paul Kramer of Harbor Beach, Jean Kramer of Kalamazoo, Sharon Kramer and her husband Eduard Bonser of Clarkston, and Michael Kramer and his wife Jessica of harbor Beach, 9 grandchildren: Katy (Ryan) Kiernicki, Keegan (Travis) Volmering, Kinsey Kramer, Makara Kramer, Carson Kramer, Sierra Bonser, Benjamin Bonser, Ayla Kramer, Nora Kramer, 1 great grandchild: Connor Kiernicki, her sisters: Harriet Booms of Monroe, Catherine Elandt of California, Shirley Suida of Arizona, Margaret Goniweicha of Ruth, and Audrey Huska of North Carolina. She was preceded in death by her brother John Booms, and brothers-in-law: Ed Elandt, Ray Suida, Ray Goniweicha, and Emil Huska. Funeral mass for Stella will be Wednesday, April 5, 2017 at St. Anthony’s Catholic Church, of the Holy Name of Mary Parish. Burial will follow in the Church Cemetery. Visitation for Stella will be Tuesday, from 2-8pm at the Ramsey Funeral Home of Harbor Beach. Visitation on Wednesday will be at the church beginning at 10am until time of services at 11 am. A Parish Vigil Service will take place on Tuesday at 7 pm at the funeral home. Memories can be shared at www.RamseyFH.com

Stella A. Kramer, age 79 of Harbor Beach, passed away Sunday, April 2, 2017 at Lakeview Extended Care and Rehab Center of the Harbor Beach Community Hospital. She was born on June 10, 1937 to the late Joseph and Dorothy (Schultz) Booms. Stella... View Obituary & Service Information

The family of Stella A. Kramer created this Life Tributes page to make it easy to share your memories.

Stella A. Kramer, age 79 of Harbor Beach, passed away Sunday,...