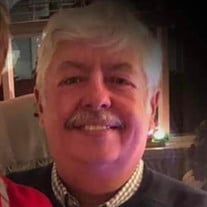 Steven Edward Schubring, 62, of Port Hope Mi , died Sunday, September 19, 2021, in his retirement state of Tennessee. Born October 13, 1958 in Huron County, Michigan, he was the son of Annabelle Thrushman Schubring and the late Edward Schubring. Steven worked for Sensient Flavors for many years before retiring in 2018. He was an active member of Lighthouse Assembly of God, where he helped make many breakfasts and benefit dinners, and enjoyed many friends. Steven was a member of the Huron county conservation club for many years, and took many young men and women on their first fishing trips. In his spare time He enjoyed collecting Coca-Cola memorabilia, auction sales, good music, and the outdoors. After moving to Tennessee, Steven worked for the Maury County School System as a bus driver, as his father did for port hope schools for many years. This job made him very happy, and he made many new friends. In addition to his mother, Annabelle Schubring of Michigan, survivors include his wife, whom he married, May 31, 1986, Debra Marie Hudson Schubring of Culleoka; daughters, Breann (Corey) Mausolf of Harbor Beach, Michigan; Trista Johns of Michigan; Season Bender of Topanga, California; sons, Jason (Darlene) Bender of Elkhart, Texas; Brandon (Jodi) Bender of Bad Axe, Michigan; and twelve grandchildren. He also leaves behind his cherished cousin, Patti (Pilaski) Smaglinski. Preceded in death by his father Edward (Barney) Schubring, Godmother / Aunt Iva Maynard, and many Thrushman and Schubring aunts and uncles. Memorial Service for Steve will be Sunday, October 3, 2021 at 3:30 pm at the Ramsey Funeral Home of Harbor Beach.

The family of Steven Schubring created this Life Tributes page to make it easy to share your memories.

Send flowers to the Schubring family.