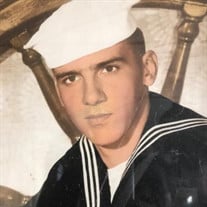 Terry Elroy Blanchard, 79 of Harbor Beach, passed away at his home on April 11, 2021. He was born on March 19, 1942 in Manistique, Michigan to Eirnel and Marie (Breathour) Blanchard. He graduated from Our Lady of Lake Huron Catholic High School in 1960. After graduation, he proudly served his country in the United States Coast Guard. He was honorably discharged in 1964. Terry wore many hats in life, including: Harbor Attendant, Sailor, Custodian and Construction Worker. To those who knew and loved him, he will always be remembered as a loving son, brother, grandfather, uncle, cousin and a great friend. He was an Elder member of the Sault Ste Marie Tribe of Chippewa Indians, Holy Name of Mary Parish (OLLH), Lifetime member of the American Legion Post 197 where he served as Sergeant at Arms, Newton Township Historical Society and the Coast Guard Auxiliary. Terry had a passion for classic cars, old movies and music. He was a licensed HAM radio operator. Terry is survived by his children Bradley Blanchard of Auburn, Christopher Blanchard of Harbor Beach and Terra (Gary) Booms or Harbor Beach, Grandchildren: Brooke (Nick) Hessling, Danielle Booms (Jason Hanson), Camryn Booms (Brady Kirsch), Garrison, Mason and Kendal. He is also survived by his siblings Joe Blanchard (Flora McEvers) of Gould City, Mari Blanchard (Brian McArthur) and Jay (Jody) Blanchard all of Harbor Beach as well as many nieces and nephews and special friend Dorothy Wilbur. His faithful dog, Bubby, was always by his side. He was preceded in death by his parents, brothers David, Kimm and Kelly, a sister Juli Mausolf and brother in law John Mausolf. Cremation has taken place. His final resting place will be Rock Falls Cemetery. In lieu of flowers, the family has requested that you consider a donation to the Lighthouse Preservation Society of Harbor Beach or the Muscular Dystrophy Association in Terry’s honor. Ramsey Funeral Home of Harbor Beach is handling all arrangements.

Terry Elroy Blanchard, 79 of Harbor Beach, passed away at his home on April 11, 2021. He was born on March 19, 1942 in Manistique, Michigan to Eirnel and Marie (Breathour) Blanchard. He graduated from Our Lady of Lake Huron Catholic High School... View Obituary & Service Information

The family of Terry E. Blanchard created this Life Tributes page to make it easy to share your memories.

Terry Elroy Blanchard, 79 of Harbor Beach, passed away at his...

Send flowers to the Blanchard family.