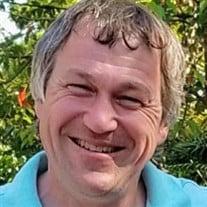 Thomas Michael Stacer, age 47, of Ruth, MI, passed away Saturday, December 7, 2019, at his home surrounded by family and under hospice care. Thomas was born on January 17, 1972, in Harbor Beach, MI, to Calvin and Judy (Wipping) Stacer. Tom and Michele (Early) were united in marriage on June 21, 2003, at St. Anthony’s Catholic Church in Helena. Tom graduated from Harbor Beach High School in 1990. He worked at Booms Construction for 29 years, and although he was the foreman, he believed in a hard day’s work and was the first to arrive at a job site and the last to leave. When he wasn’t building, Tom also enjoyed working on the Stacer family farm. Tom loved life and was an inspiration to all who knew him during his battle with brain cancer. Tom enjoyed helping people, and he regularly donated blood, earning his five-gallon pin. He loved playing league hockey, crop touring, a good meal at places off the beaten path, road trips for ice cream, his weekly Saturday trip to the Sherman Township dump, his dogs, Rufus and Lamont, and cats, Lucky and Buttons. Tom was hardworking, funny, thoughtful, and loyal. He will be forever remembered for his love for his wife, Michele, for his big smile, and the sound of his laughter. Thomas is survived by his wife, Michele, of Ruth; his parents, Calvin and Judy Stacer of Harbor Beach; his children, Shannon (Steve) Bledsoe of Standish, Malorie (Jeffrey) Stressman of Twining, and Cory (Colette) Champine of Port Huron; his sister, Michele (Cate) Stacer-Bransfield of St. Petersburg, FL; his sister-in-law, Keri Stacer of Ruth; his brother, Scott (Renee) Stacer of Ruth; his sister-in-law, Cindy (Rick) Reda; his niece and godchild, Lauren Stacer; his nephew, Bentley Stacer; and his grandchildren Madison and Molly Bledsoe, and Mitchell Morris. Thomas was preceded in death by his brother, Paul Stacer, and grandparents, Robert and Mary Wipping and Simon and Louise Stacer. Funeral Mass for Thomas Stacer will be Tuesday, December 10, 2019, at 11:30 a.m. at St. Anthony’s Catholic Church, of the Holy Name of Mary Parish, with Fr. George Amos officiating. Burial will follow in the church cemetery. Visitation on Tuesday at the church will begin at 8:30 a.m. until time of service at 11:30 a.m. Arrangements are being handled by the Ramsey Funeral home of Harbor Beach. Memorials may be made to the family discretionary fund, and memories can be shared at www.RamseyFH.com.

Thomas Michael Stacer, age 47, of Ruth, MI, passed away Saturday, December 7, 2019, at his home surrounded by family and under hospice care. Thomas was born on January 17, 1972, in Harbor Beach, MI, to Calvin and Judy (Wipping) Stacer. Tom and... View Obituary & Service Information

The family of Thomas M. Stacer created this Life Tributes page to make it easy to share your memories.

Send flowers to the Stacer family.