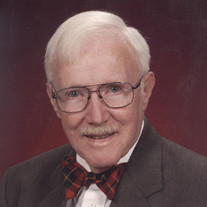 VICTORY E. INGRAM, age 98 of Citra, Florida, formerly of Port Hope, passed away Saturday, July 1, 2017 at his home in Florida. He was born on November 25, 1918 in Port Hope to the late Sam and Clara (Kretchman) Ingram. Vic served in the US Army during World War II. Vic married Audrey Richardson on October 21, 1939 in Port Hope, she preceded him in death on November 10, 1999. Vic then married Janet “Carol” Riley on February 20, 2001 in Citra, Florida. Vic was base operator and instructor of the Huron Memorial Airport in Bad Axe for 15 years. He was one of the founding members of the Huron Aviation Club. He enjoyed flying and was still flying his plane less than two years ago. He was member of the Experimental Aircraft Association (EAA), the Aircraft Owners Pilot Association, the Patch O'Blue Homeowners Assocation, and was a former member of teh Lions Club, Gideons, Citra First United Methodist Church, and the Citra Community Center. Vic received the Oldest Pilot award for the EAA Chapter 812. Vic is survived by his wife Janet “carol” Ingram of Citra, Florida, and children: Vicky Wrobel of Port Hope, Faith Lange and her husband Dean of Midland, Marcia Kloska and her husband Doug of Lapeer, Sam Ingram and his wife Jessica of Port Hope, 12 grandchildren:Jackie & Ronnie, Carrie, Philip, Greg & Candance, Joe and Guyan, James and Michelle, Tony & Kim, Adam & Beth, Johnny & Breann, Andrew & Kim, Sara & Brian, Leah & Chad, 44 great grandchildren, 5 great great grandchildren, Step Children: Barry, Debra & Scott, Curtis, and Dana & Chantel. Funeral Services for Vic will be Tuesday, July 11, 2017 at 11am at the Ramsey Funeral Home of Harbor Beach. Burial will take place at Lakeview Ceemtery. Visitation for Vic will be on Monday, from 2-8pm at the funeral home, and on Tuesday beginning at 10 am until time of services at 11 am. Memories can be shared at www.RamseyFH.com

VICTORY E. INGRAM, age 98 of Citra, Florida, formerly of Port Hope, passed away Saturday, July 1, 2017 at his home in Florida. He was born on November 25, 1918 in Port Hope to the late Sam and Clara (Kretchman) Ingram. Vic served in the US... View Obituary & Service Information

The family of Victory E. Ingram created this Life Tributes page to make it easy to share your memories.

Send flowers to the Ingram family.