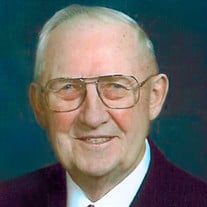 Walter Cook, age 95, passed away peacefully January 14, 2016 at the Huron County Medical Care Facility in Bad Axe surrounded by his loving family. Walt was born on Feb. 17, 1920 in Sigel Township to the late Frank and Bernice (Duda) Kurcharczyk. He is survived by his loving wife, Minnie, and five children: Marge Lanzi, Lorraine (Dan) Beechuk, Gloria (Charlie) Seitz, Clare (Sue) Cook, Wayne (Linda) Cook. In addition the grandchildren: David (Theresa ) Lanzi, Paul (Heather) Lanzi, Kimberly(Jason) Brown, Robbie (Robyn) Beechuk, Wendy (Glenn) Joslyn, Tyler Cook, Zachery (Sarah) Cook, Jason (Rhonda) Cook, Alicia (Dick) Dondineau and great-grandchildren: Josh Maloney, Jessica Joslyn, Tom, Natalie and Katie Lanzi, Tenley and Carson Cook, and great-great-grandchild, Lulu Maloney. Walt sailed the Great Lakes in the early 1940's. He worked in the automotive industry in Detroit and in 1945 returned to Sigel Township for a career in farming. Walt and Minnie (Osentoski) were united in marriage on Oct. 13, 1945 in Ubly. They recently celebrated their 70th wedding anniversary with family in Frankenmuth. After 40 years of farming he retired in 1985. Walt's motto throughout life was 'to make the best better' and lived this through his community and civic involvement. He served on the Thumb Electric Board of Directors for 38 years. He was Director of the Federal Land Bank Association of Caro, President of the Michigan Land Bank Association, Vice-Chairman of the Huron County Soil Conservation District Board, Vice-Chairman Huron County Zoning Board of Appeals, member of Council on Aging as well as serving on Parish Council at Our Lady of Lake Huron Catholic Church and a member of the Knights of Columbus. Since retirement he became actively involved with the Port Hope and Harbor Beach Senior Clubs. He loved polka dancing, playing Euchre, crop touring, and talking about farming and current events. Walt is survived by sister, Gertrude Oberski, and sisters-in-law, Edith Cook, Rita Cook and Lucille Glowzinski and Chet and Martha Leppek. He is preceded in death by Bill and Mary Cook, Clem and Cecelia Cook, Phil and Gladys Cook, Albert Oberski, Gordon and Sylvia Cook, Carl Cook, Leo and Angeline Grifka, and Albert Cook as well as 17 in-laws. Funeral mass will be Thursday, January 21 at 11:30am at Our Lady of Lake Huron Catholic Church in Harbor Beach of the Holy Name of Mary Parish, with Fr. William Spencer officiating. Visitation for Walt will be Wednesday January 20, 2016 from 2-8pm at the Ramsey Funeral Home in Harbor Beach. The Knights of Columbus Rosary will be at 7pm with a Vigil Service at 7:30pm. Visitation on Thursday will be at the church beginning at 10am until the time of service at 11:30am. In lieu of flowers, consider a donation to your charity of choice in Walter's name.

The family of Walter Cook created this Life Tributes page to make it easy to share your memories.

Send flowers to the Cook family.