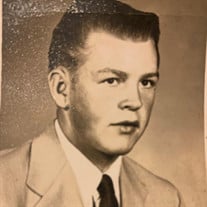 Willard C. Reinke, age 81 of Port Hope, passed away Tuesday, January 18, 2022 at McLaren Bay Regional Center in Bay City. He was born on November 5, 1940 in Port Hope to the late Carl & Caroline (Pleiness) Reinke. Willard and Ramona Johnston were united in marriage on December 3, 1960 in Port Hope. Willard worked for over 40 years at GM Automotive, retiring in 1999. He enjoyed hunting, riding on his golf cart, on his Harley Davidson, collecting tractors, his dog, and being with his friends and family. Willard is survived by his wife Ramona Reinke of Port Hope, son Kurt (Judy) Reinke of Davison, 1 grandchildren Kyle (Nikoliana) Reinke of Davison, siblings: Larry (Kathy) Reinke of Port Hope, Betty (Herb) Leese of Port Hope, sister-in-law Susan Reinke of Port Hope, and brother-in-law Gary Schave of Port Hope, and many nieces and nephews. Willard was preceded in death by his son Mark Reinke, brother: Richard Reinke, and sister: Joyce Schave. Funeral Services for Willard will be Monday, January 24, 2022 at 1 pm at St. John Lutheran Church of Port Hope, with Rev. David Dodge officiating. Burial will follow in Marquardt Cemetery. Visitation for Willard will be at the church, on Monday, beginning at 10 am until time of services at 1 pm. Arrangements are being handled by the Ramsey Funeral Home of Harbor Beach. Memories can be shared at www.RamseyFH.com

The family of Willard C. Reinke created this Life Tributes page to make it easy to share your memories.

Send flowers to the Reinke family.