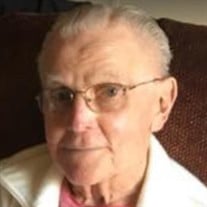 Heaven gained our angel, William Howard Semp, today. “Bill” passed away Monday, April 1, 2019 at Meadow Lane Assisted Living, in Bad Axe, Michigan after a brief illness. Bill was born on February, 16, 1930 to Jessie Ruth and Howard William Semp in Imlay City, Michigan. He lived most of his life in Romeo, Michigan where he graduated from Romeo High School in 1948, having enjoyed a stellar career in football, baseball and basketball. He spent one year in the US Naval Reserves, serving on the USS Rehoboth, an oceanographic survey ship, overseas. He worked for Ford Proving Grounds in Romeo, as a test car driver and also the better part of his working career as a journeyman electrician. Bill was very talented and generously shared his gifts with others. The greatest love of his life was his wife of 69+ years, Barbara Gloria Schultz Semp, his high school sweetheart. A devoted couple known to many in the Romeo community, Bill and Gloria enjoyed all kinds of sports, including golf and bowling, attended all sporting events at Romeo High School (home and away) for many years and were avid Tigers, Lions, Red Wings, Pistons, Wolverines and Spartan fans. An enthusiastic game of cards, dancing and classic country western music were also favorites of Bill and Gloria. A storybook romance for 70+ years…..you would hardly ever see one without the other in and around their hometown. Bill also loved his family and friends and appreciated spending time with them often. Bill and Gloria had four children: Michael (Pam) Semp of Harbor Beach, William (Corky) Semp, of Romeo, Carrie (Karl) Keifer, of Troy and Tammy (Jim) Coulter of Bath. Their grandchildren kept them young…Brad (Lee) Semp, Greg (Ashley) Semp and Derek (Karen) Semp, Matthew Keifer, Julie (Brian) Evans, Adam (Emily) Keifer, Michael Rodriquez, Brian (Mary) Rodriquez and Sabreena Rodriquez. And their great grandchildren amazed them…Morgan, Owen, Nathan, Austin, Peyton, Makenzie, Ashlyn, Kayla, Tyler, Christian, Isabella, Vienna, London, Harper and Meara. Time spent with those Bill loved, were and will remain, cherished times and memories. Bill was predeceased by his parents and only sibling, Joan Kage Jackson, sister in laws, Dolline (Wayne) Campbell, Diana (Stan) Ganfield, Velma Jean (Kret) Havers and brother in law, Gary Schultz. A private family memorial service will be held at a later date. Funeral arrangements are being handled by the Ramsey Funeral Home in Harbor Beach, Michigan. Memories can be shared at www.RamseyFH.com

The family of William H. Semp created this Life Tributes page to make it easy to share your memories.

Send flowers to the Semp family.